Glow Promotes the Film ‘The Colony’

Working with director Steven List, Glow has formed an agreement to promote a very important and political 15-minute film short from Fox SearchLab called ‘The Colony”. See description below. 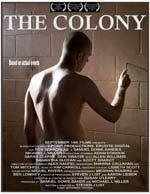 About ‘The Colony’:
Based on the disappearance of Boris Weisfeiler, a Penn State professor who vanished while hiking in Chile in 1985. For 15 years, U.S. official insisted there was no evidence of foul play in his case. In 2000, declassified documents revealed that from the first week of his disappearance, State Dept. officials had reliable reports that Weisfeiler had been kidnapped by the Chilean military and turned over to COLONIA DIGNIDAD, a secretive religious sect run by former Nazis. Weisfeiler was apparently kept alive for a period of years in the colony, which functioned as a political prison and torture center for the Pinochet regime.